Every dog owner would probably agree that there’s nothing in this wide, wild world they wouldn’t do to make their beloved pupper at least a tiny bit happier. Even if it means sleeping downstairs on a not-so-comfortable pull-out couch a few times a week. 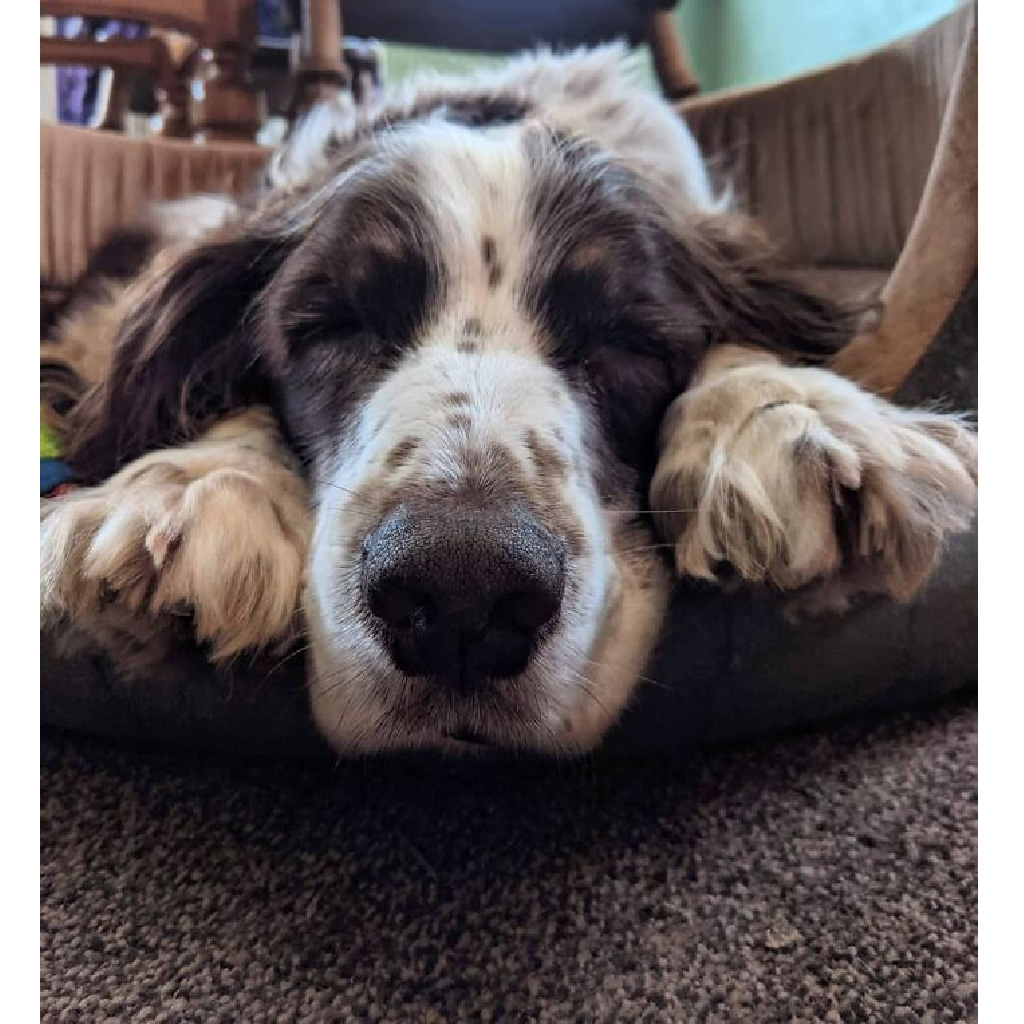 When Catherine Morris’ family adopted Spike, the English springer spaniel, nine years ago, they determined that he would be a “downstairs dog.” But Spike had a different idea of how things should go.

“The first night we had him, we closed the stair gate and went to bed,” Morris told. “He whined for a couple of minutes before jumping over the gate in the dark and trotting up into my parents’ room and straight up onto the bed! And that’s where he slept from then on.” 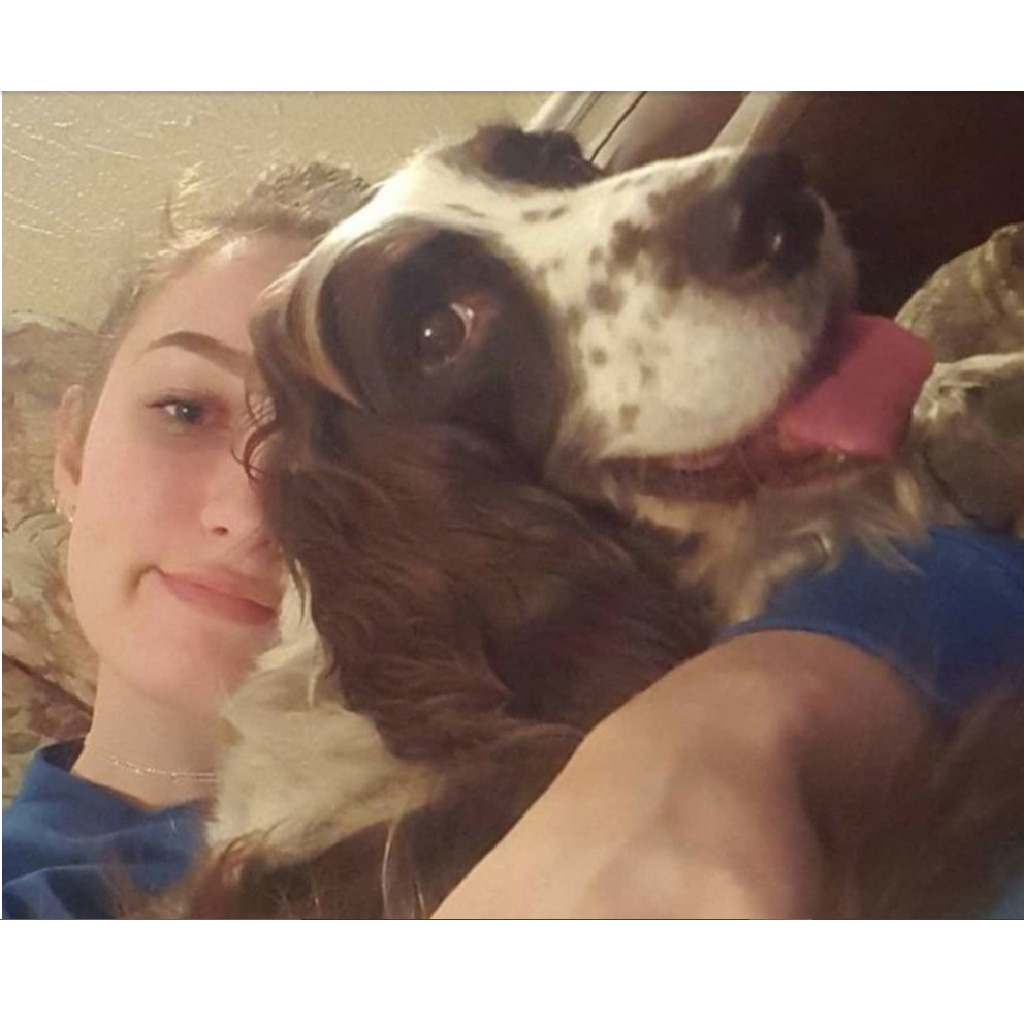 According to Catherine, Spike loves to snuggle and when he sleeps in bed with them he will try to push himself under the blankets so that he can be as close to his humans as possible. However, Spike is fourteen years old now and has had two [sᴛʀᴏᴋᴇs] so he is not in the greatest of health anymore.

“He is very much an old man now, especially after his second [sᴛʀᴏᴋᴇs], so spends most of his time snoozing in the day and cuddling up with his people as much as possible,” Spike’s owner told us. “He’s a very cheeky chappy too and thinks everything we have is for sharing—personal space, beds, food, and any drink that foolishly gets left on the floor from tea to wine—we have to keep a very close eye on him!”

For days after his second [sᴛʀᴏᴋᴇs], Spike couldn’t stand, so Morris and her parents carried him around the house. But the senior dog was determined to get better and relearned how to walk. 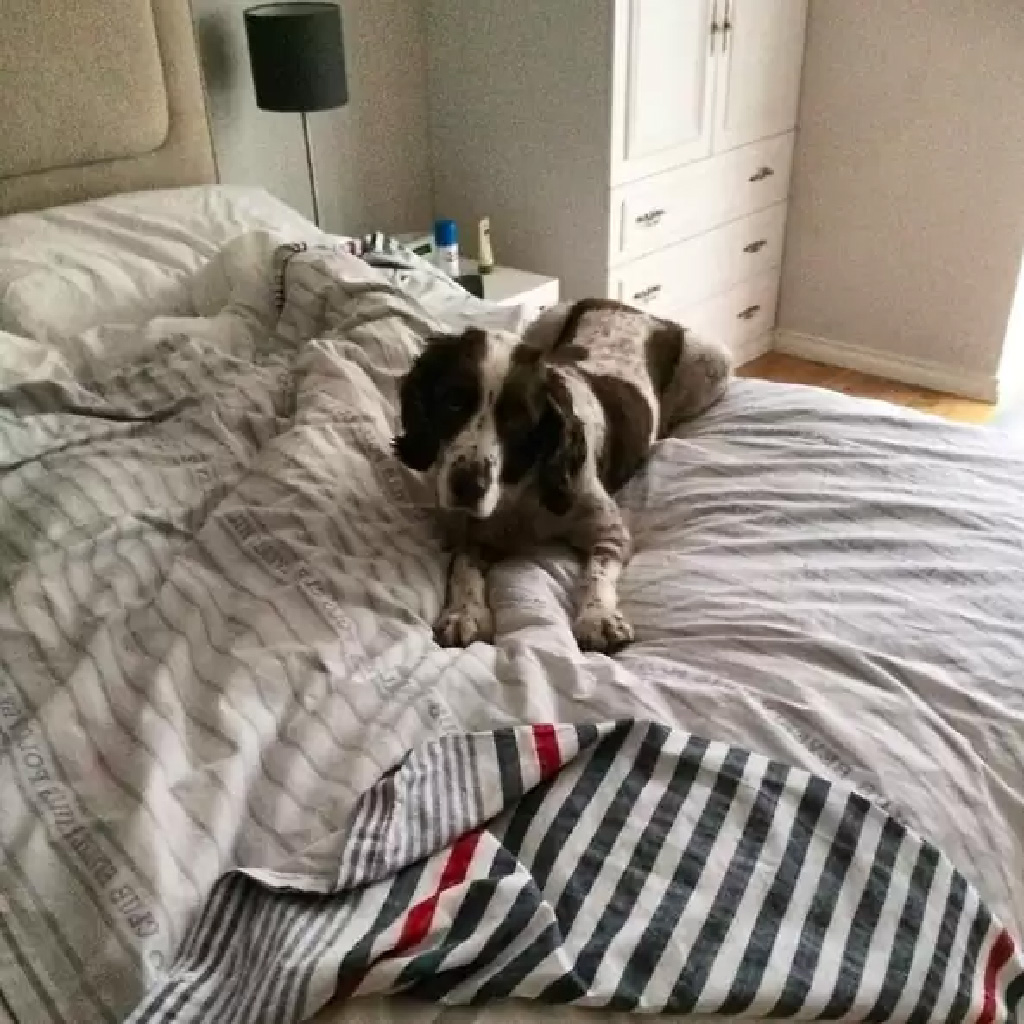 However, Spike still isn’t strong enough to reliably go up and downstairs, so his family had to block off his favorite place — the bedroom.

“He has always slept on the bed upstairs, so when the stairs became too dangerous for him it was an immediate transition to sleeping downstairs,” the owner explained to us.

They knew Spike wouldn’t let his weakened legs stop him from trying to climb the stairs to snuggle with his family. So they set up their stair gate and came up with a plan to make the old dog happy. 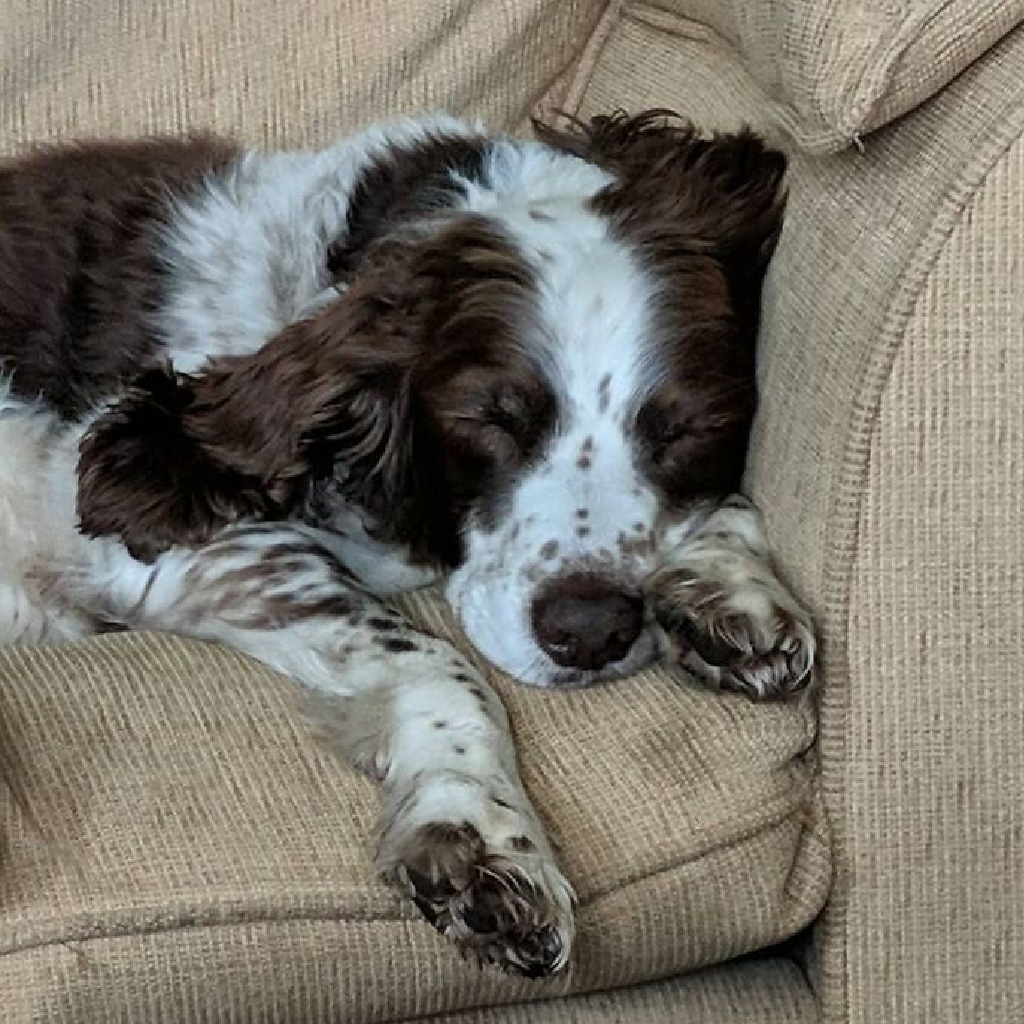 Now, Spike’s family alternate sleeping on the pull-out couch with him each night to make sure the pup doesn’t try to jump the gate.

“This new schedule started while I was away at university, so my parents spent alternate nights downstairs with Spike,” Morris said. “Since I moved back home, I’ve joined the rotation so all in all, we get a bit more sleep between the three of us.”

Spike’s dad takes special care to make sure his old pup is comfortable at night. 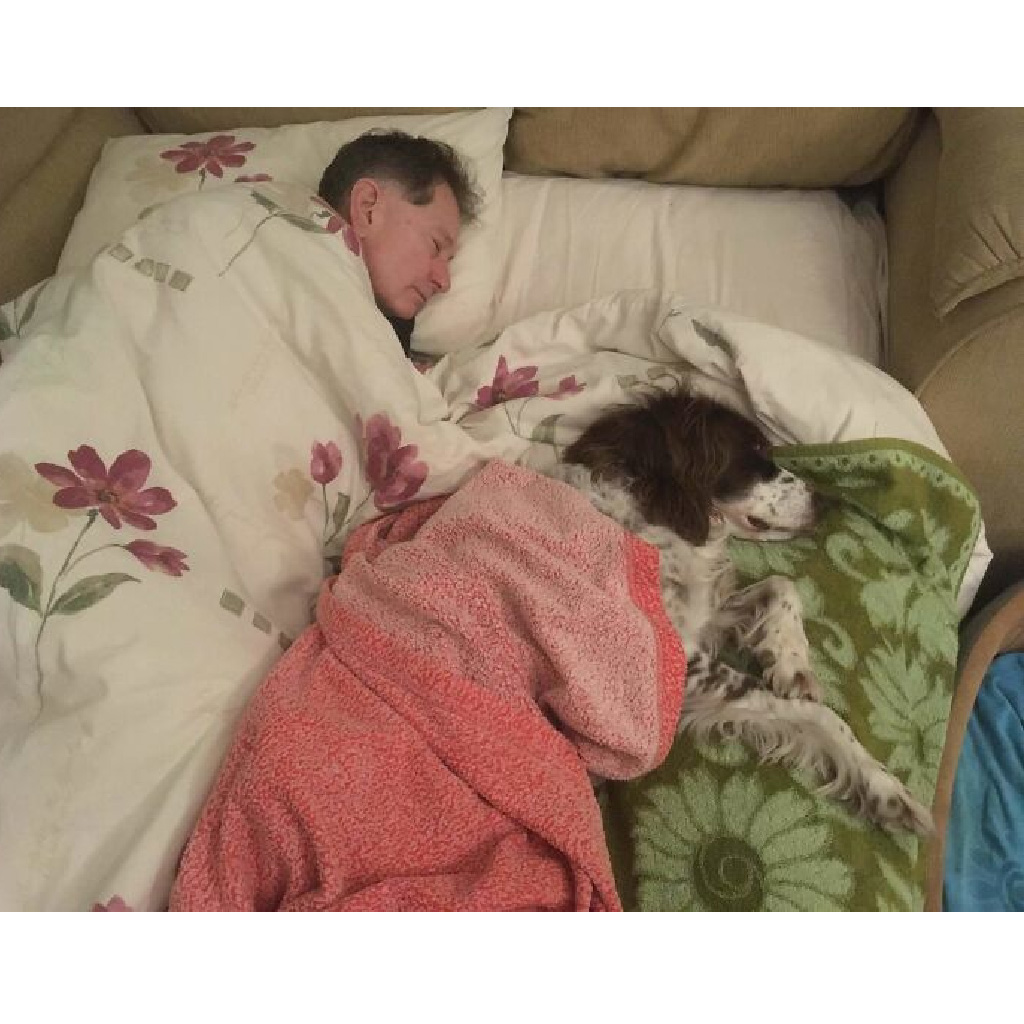 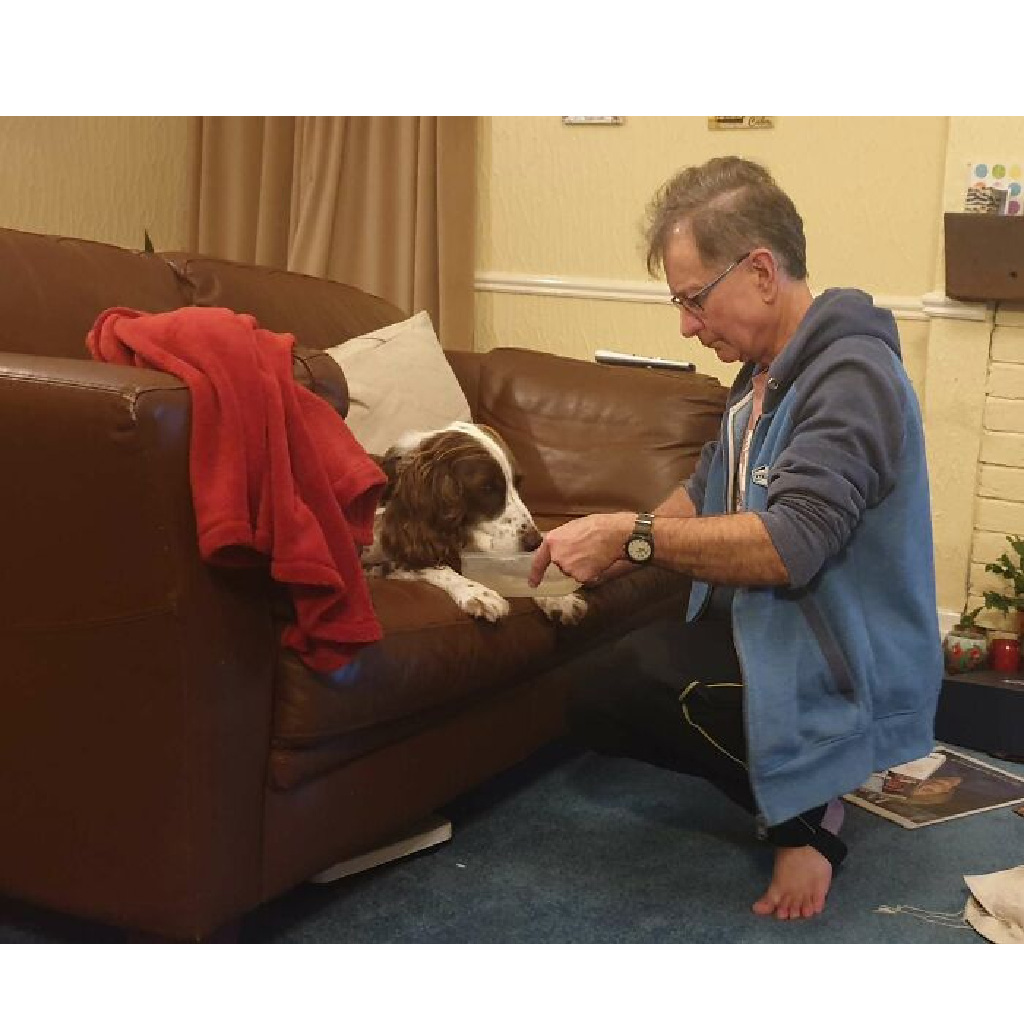 “My dad will also bring Spike his water and food to the sofa and feed him by hand to make sure he gets his medicines and keeps his strength up,” she added.