Who doesn’t like a good game of hide and seek? It’s not only the thrill of the chase but also the moment when someone is found that brings about much excitement, especially when it’s with kids, or better yet—pets! Dogs love playing with their owners, hide and seek, for instance. These guys are very smart. They can spot precisely where their owners are hiding.

Meet Moose, the lovable Goldie who was very smart. Shane and Lindsey are the owners of an adorable 10-months-old Golden Retriever, Moose, who loves playing hide-and-seek with him. And Moose always gets super excited when the game starts.
Moose then turns around and heads for the door, but the owner asks him, “Where is he?”, giving Moose a subtle hint of where to look. 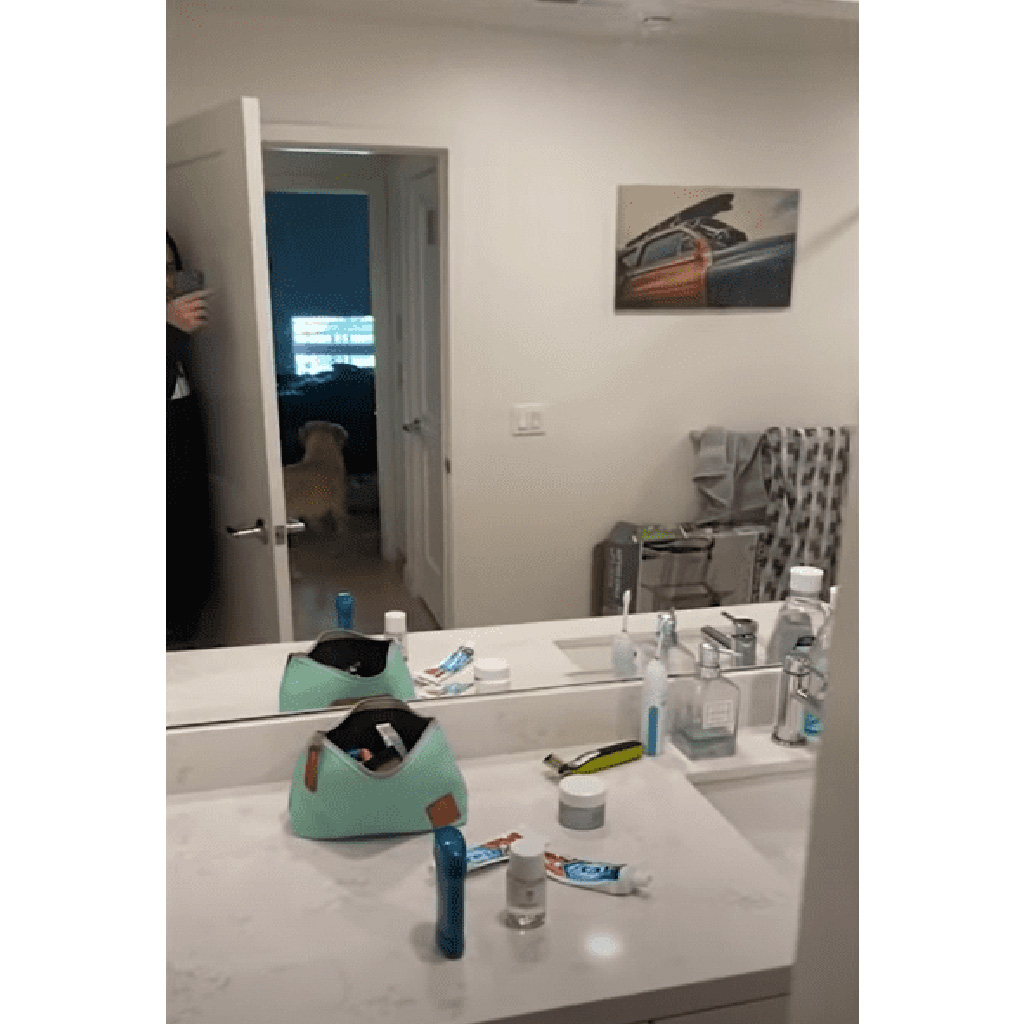 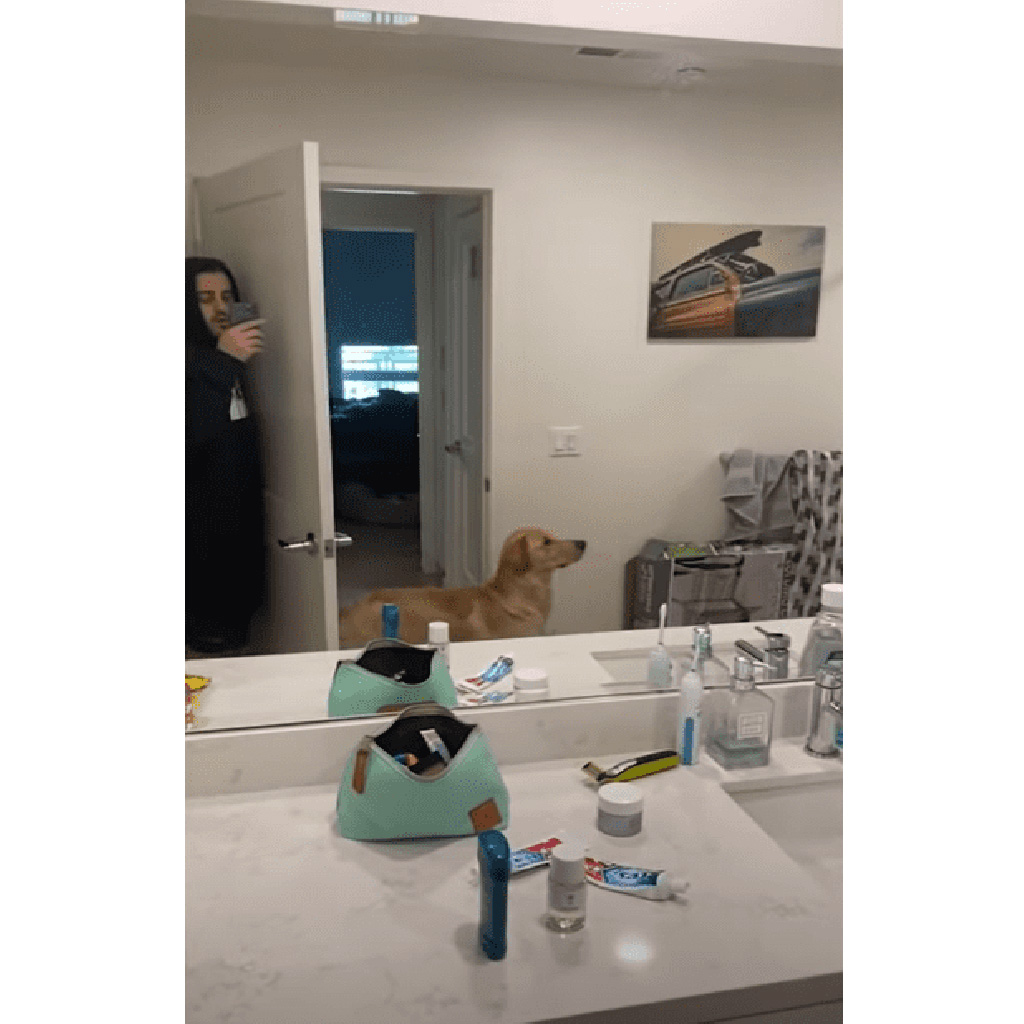 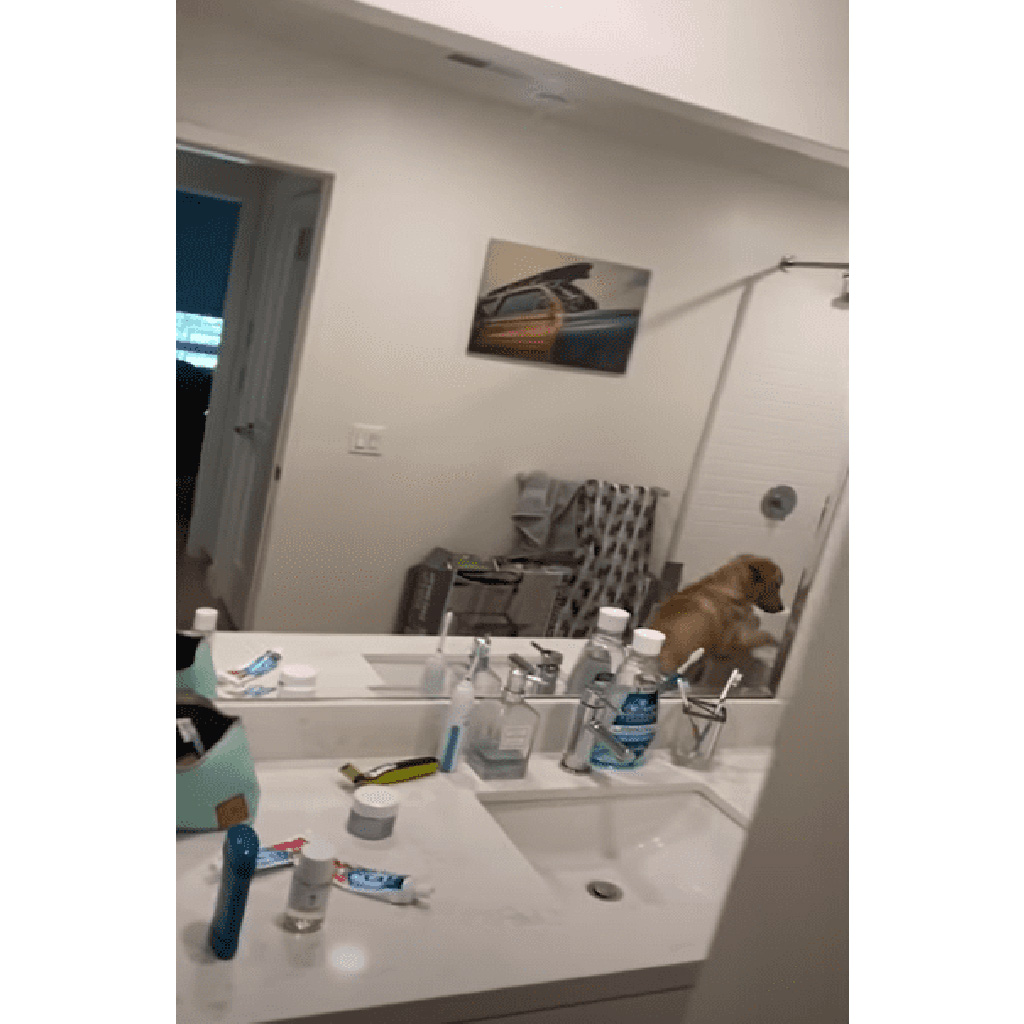 This is the moment that Moose catches a glimpse of Shane in the mirror, jumping on the bathroom counter and going quiet for a second, turning from super excited to hold on, I need to process this mode. 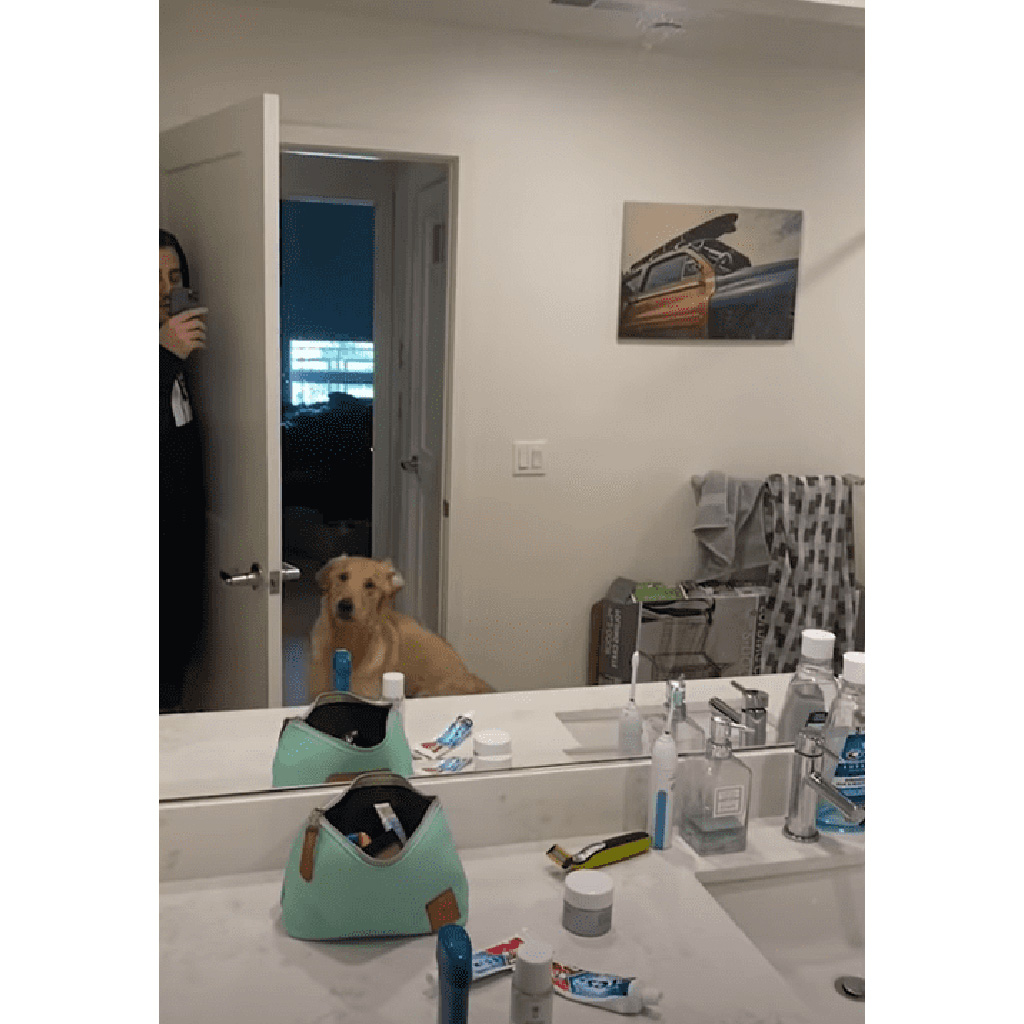 Moose stood there for a good couple of seconds in disbelief of what he was seeing, making for some of the funniest and most adorable couples of seconds you’ll see today. 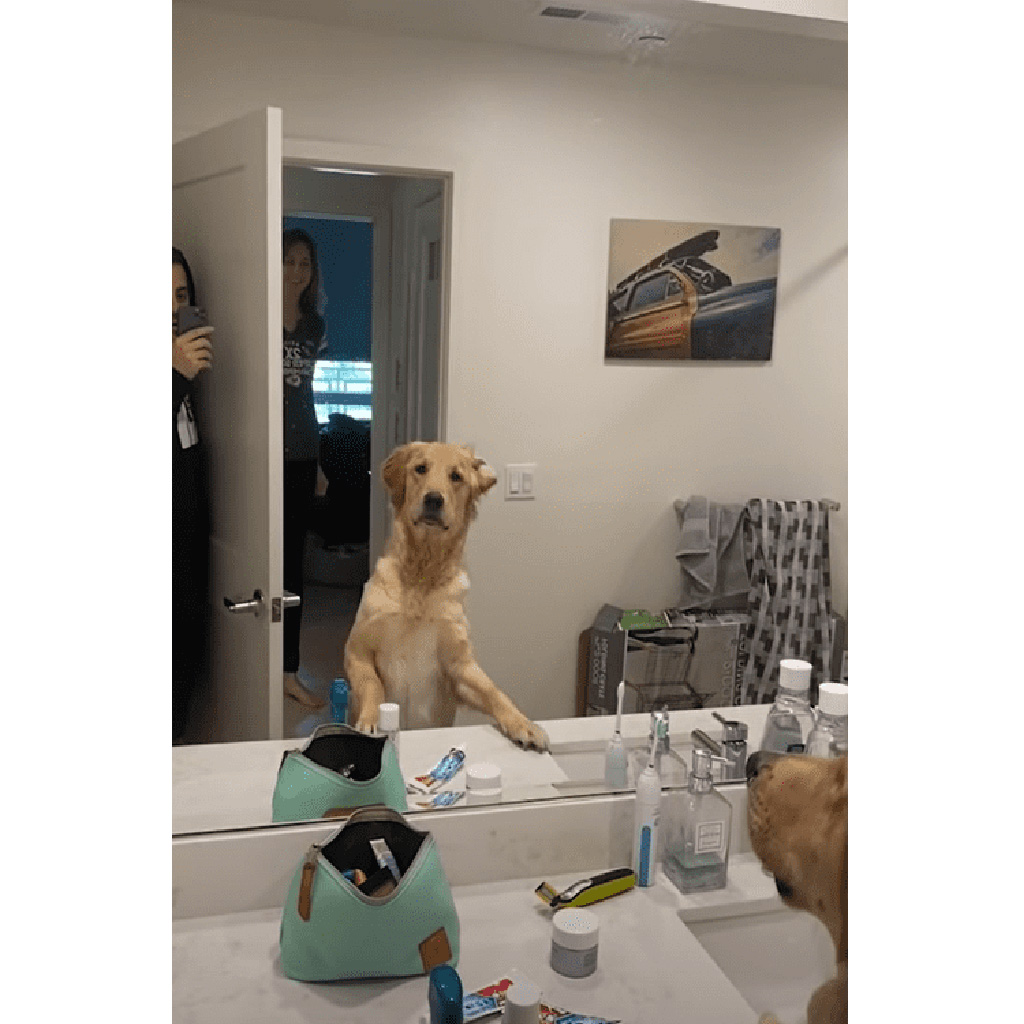 But, soon Moose understands what’s going on and the jig is up—he quickly turns around and jumps toward Shane in a way that says gotcha! 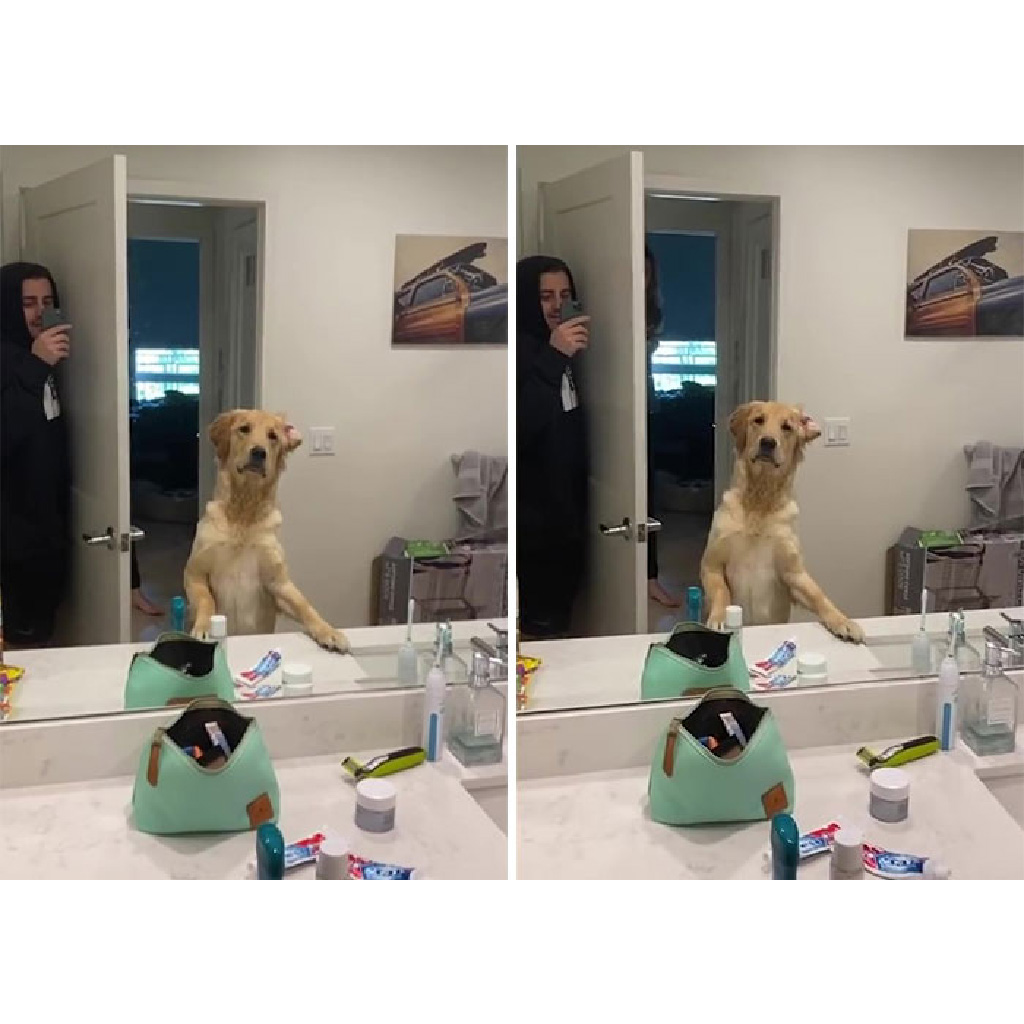 Not for a second does Moose like to give up when it comes to a challenge. This competitiveness runs in all sorts of dogs. The word ‘losing’ is not part of their dictionary. The more it takes for him to find Lindsey and Shane, the more excited and impatient he gets, which makes his senses dial up to 11.
Running all around the house wagging his tail in excitement, the doggo decided to check in the bathroom. When Moose entered the bathroom, he looked around for his owners when suddenly he saw Shane, but through the mirror. The overly excited good boy got really confused as to why couldn’t he see Shane in person but can see him through the mirror.

Shane was actually hiding behind the bathroom door, with his phone in his hand recording the whole experience. As soon as Moose came in, he caught a glimpse of his dad through the mirror and frantically jumped on the bathroom counter to catch him but stopped right in his tracks and kept staring for a while. He needed time to absorb what was happening. He was quick to notice the unusual and surely questioned himself as to why he was seeing a reflection of himself, Lindsey, and Shane.
It’s not yet fully known whether dogs understand the reflective properties of mirrors because dogs rely much more on their nose rather than their eyes, and a reflection isn’t something that has a particular smell. However, it is believed that dogs do have a sense of self-awareness in the sense that they understand that they have a body and that they have possessions.

Moose stood there for a good couple of seconds in disbelief at what he’s seeing, making for some of the funniest and most adorable couples of seconds you’ll see today.

But, soon Moose understands what’s going on and the jig is up—he quickly turns around and jumps towards Shane in a way that says gotcha!

Thankfully, they both recorded the whole experience. People online found it super adorable and the video soon went viral on the internet