Everyone needs a helping hand now and then. And, that also includes our furred and feathered friends. So, when this sweet pup and his owner found an injured parrot while out on a walk one day, there was no doubt they would take him.

Viviana Dávila and her puppy Hiro were relaxing in the backyard of their house in Puerto Rico when they were surprised by something strange that was on the ground.
The Labrador retriever did not hesitate to go see what it was about and wanted his mother to know about his great find, which was not an object, but someone who had arrived there due to some unfortunate situation. 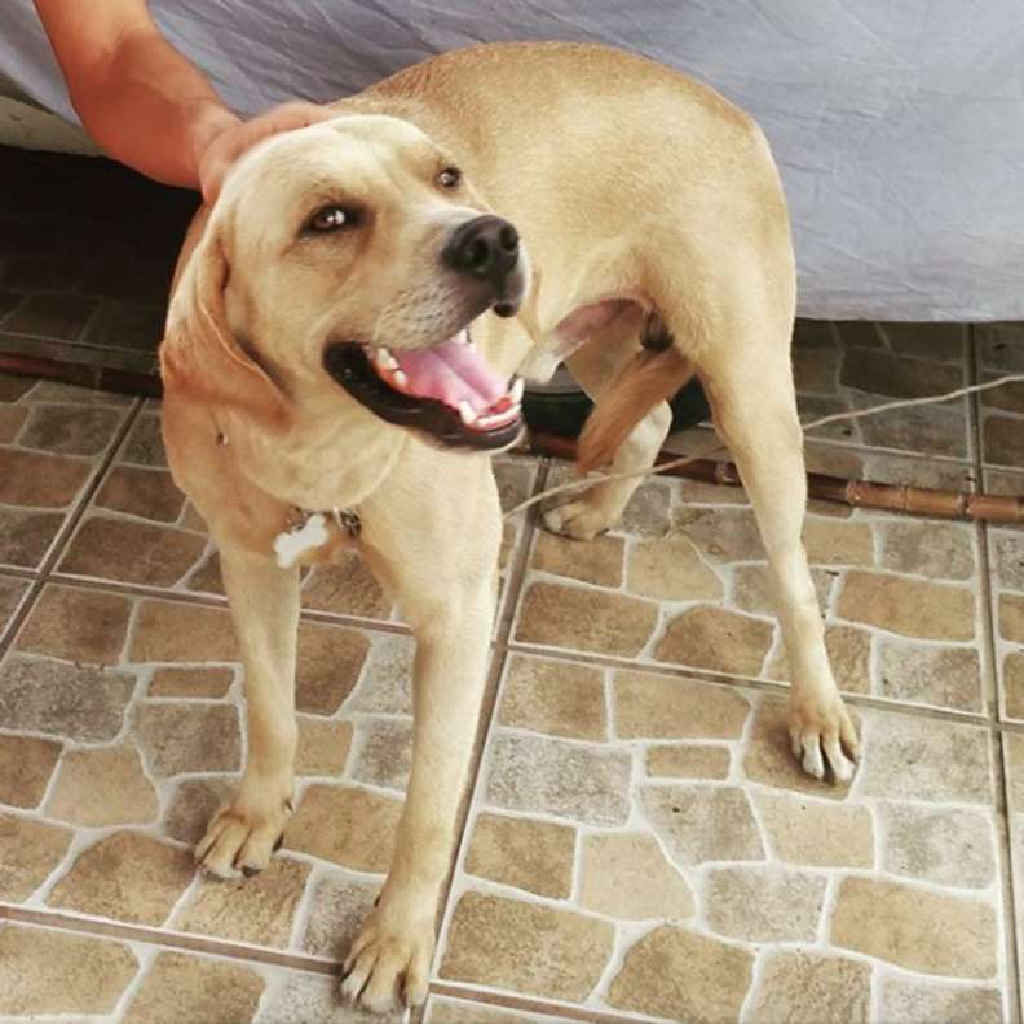 “I noticed Hiro licking something on the grass. He licked and he looked at me and insisted again licking and looking at me. It was a sign that something was happening and I approached,” said Viviana.

The puppy had found a parrot that needed help.

“Immediately, I looked for a towel and picked it up, the little bird was very defenseless,” added Viviana. 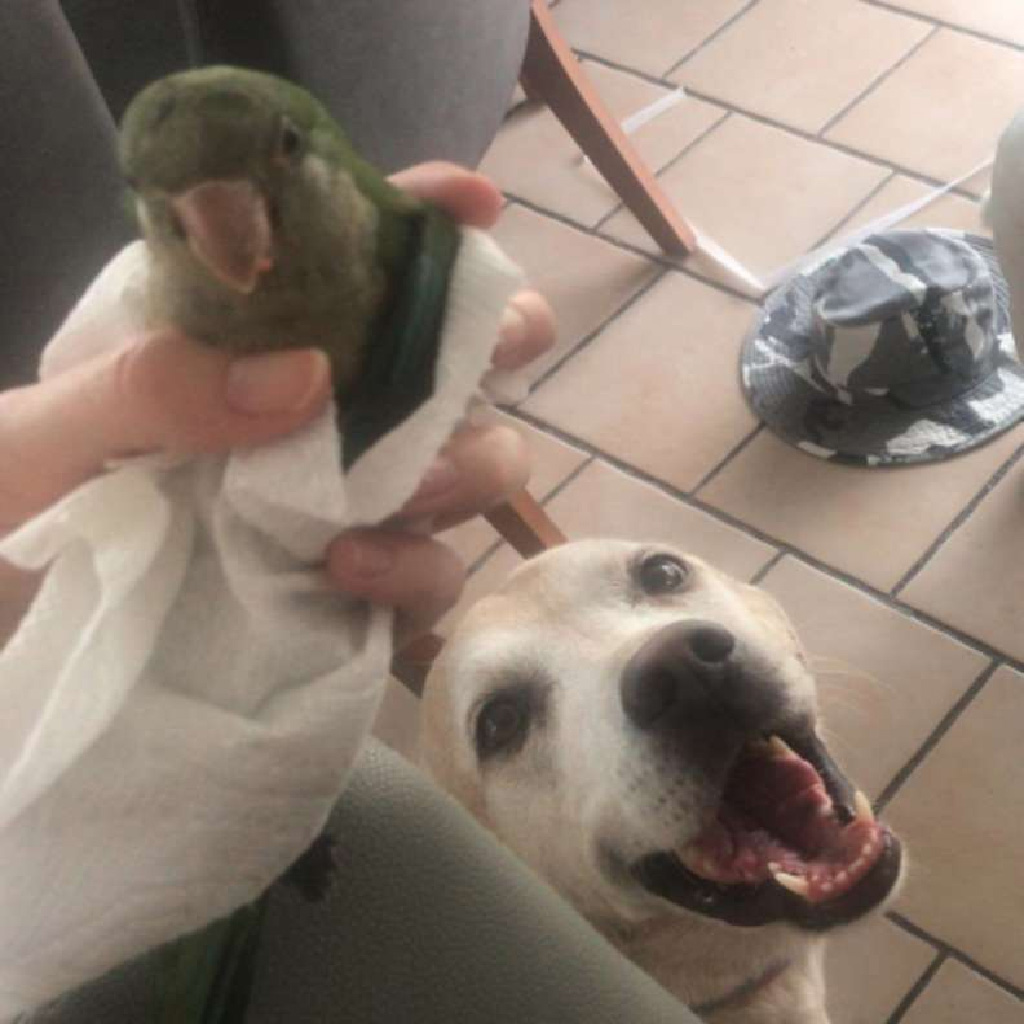 He knew they had to do something to help the bird, so they took it home with them. The bird was shaken up so they put him in a cage to keep him safe. Then, he waited. He refused to leave his mom’s side as she held the bird, and he watched her intently, waiting for the bird to wake up. 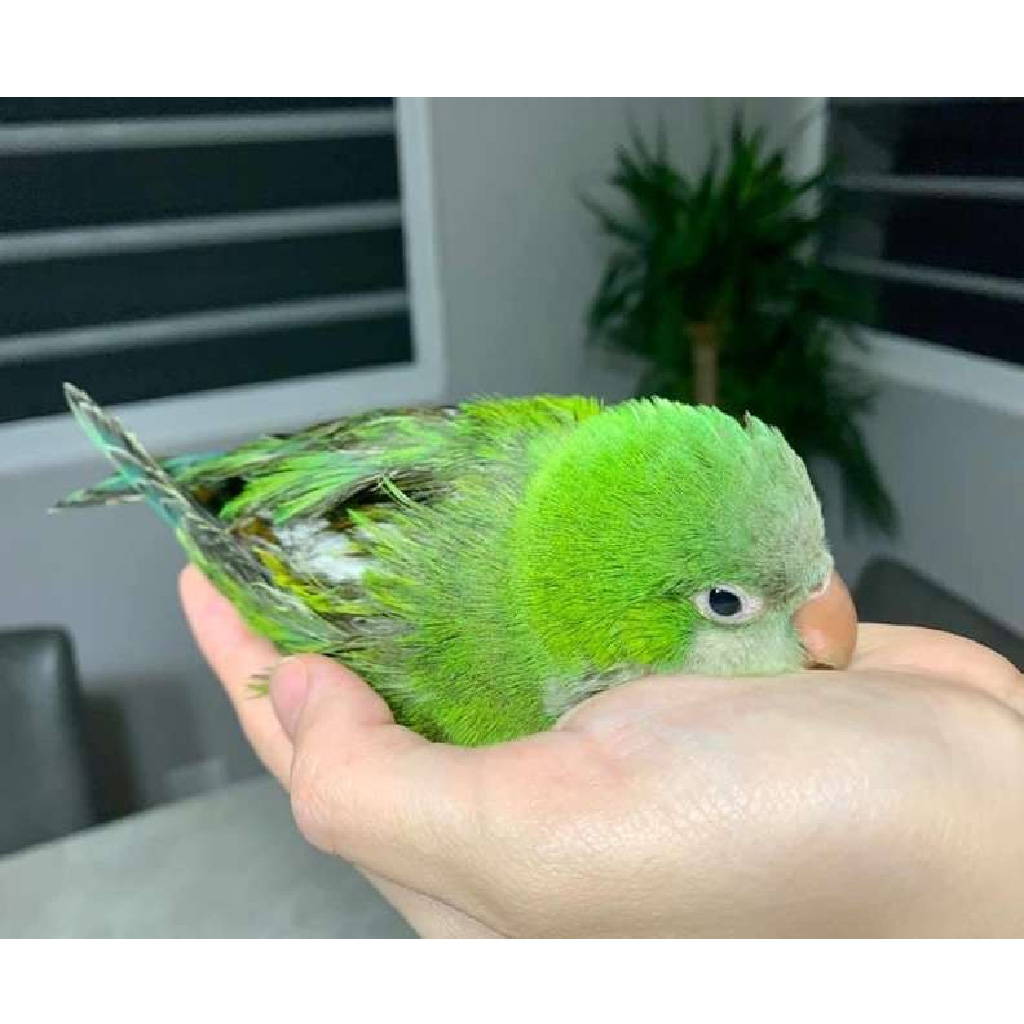 After consulting a veterinarian, Viviana learned that the bird was a small Quaker parrot. The poor thing was paraplegic probably because he had fallen from his nest.
Under those conditions his chances of survival in the wild were slim , if not none. He probably would have perished on the ground if Hiro hadn’t found him in time. 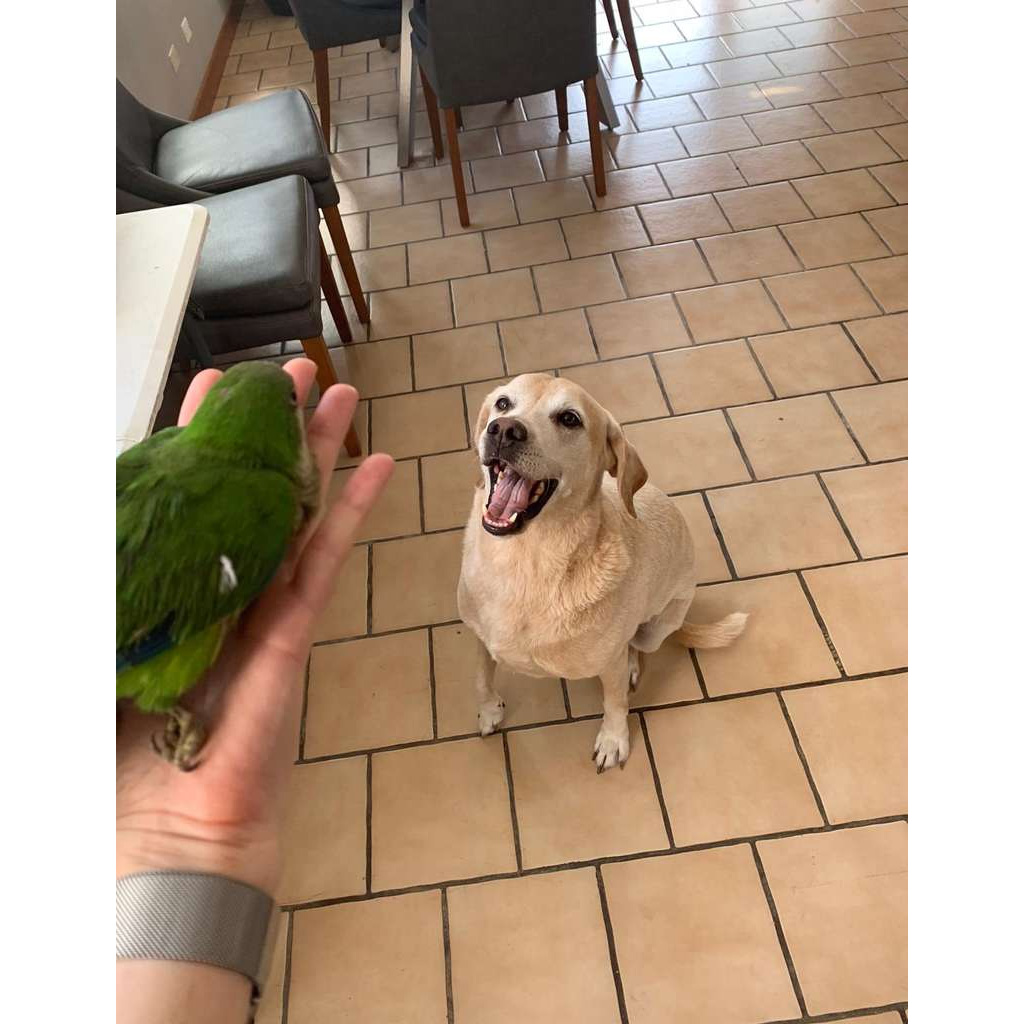 However, this little parrot proved to be a fighter and Viviana promised to keep the light of hope burning, but she never imagined that she would have the help of the puppy , who took his role as protective father very seriously.

The puppy decided that he would not leave Hope’s side, as the parrot was called

“The vet told us that in similar cases he recommends putting them to sleep forever, however, he was very surprised to see how Hope struggled to live,” said Viviana.

It was then that he decided to welcome Hope into his family to take care of him as best he could following the vet’s instructions.

“After a week and a half his improvement was remarkable. Hiro has been a part of that effort, from day one she hasn’t walked away from him,” Viviana said.

Viviana fed him regularly and did her best to keep him very comfortable.

“Nothing matters to him anymore because he has a new purpose: to take care of Hope,” Viviana said. 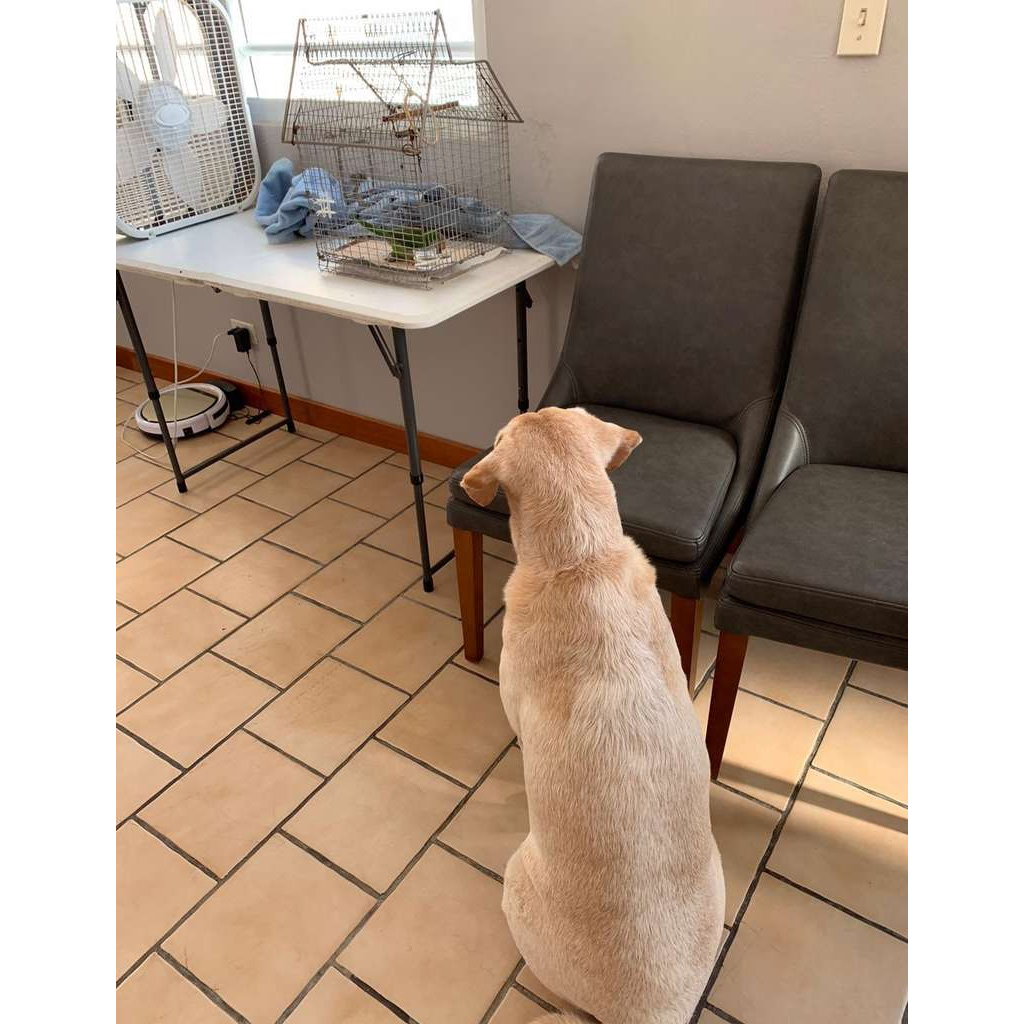 Little by little, Hope adapted to her new home, her body getting stronger every day. The Labrador retriever has not rested to ensure that her heart heals as well.

“Having hope and taking care of him so far has been a great experience. Hope teaches us every day about perseverance and empathy”, added Viviana.

One day, Hope decided to roam and Labrador was right there to greet him. Once the bird was out of the cage, Labrador happily greeted him as if that’s what he’d been waiting for. Hope began exploring with a tail-wagging Labrador right by his side. Amazingly, the two play together despite their huge size difference. 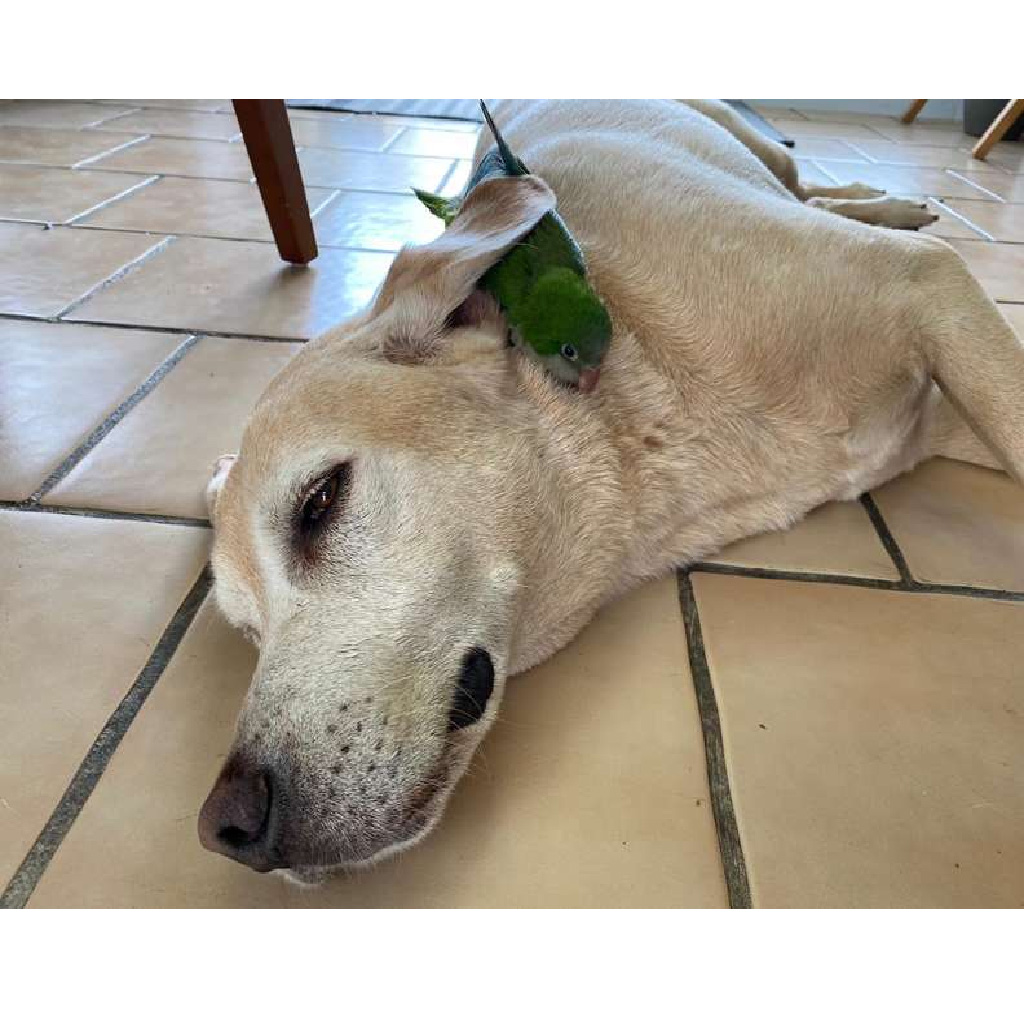 Even sweeter, Labrador and Hope love to cuddle. Labrador puts his big dog head right on top of the delicate Hope but never hurts him. He even shares his dog bed with his little birdy friend. It’s as if they had always been together.

Nowadays wherever Hope goes, the puppy is there too. A beautiful friendship was born between them. Hopefully, Hope will continue to thrive with Hiro by her side.

“We are proud and honored to have Hiro. Although he has always been a very good puppy », expressed Viviana.

The story of these friends went viral on Twitter thanks to Viviana’s sister, who lives in Chicago, United States. The scenes move thousands of people.